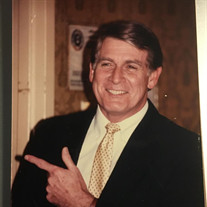 Ralph Harold Vahue, 87, died on May 15, 2021 in the care of hospice in Palm Harbor, FL. He was born June 26, 1933 in New Castle PA to Harold and Eleanor (Brudin) Vahue, He grew up in Sherburne NY and graduated from Sherburne-Earlville HS in 1950.  He attended college graduating with a Teaching degree from Buffalo State Teachers College. He later received his master’s degree from Niagara University in Educational Administration. He was Honorably discharged from the United States Army in 1958.  A lifelong educator, he followed his father and began as a high school industrial arts teacher later transitioning into administration and retiring as the Principal of the Orleans-Niagara BOCES. His passion for teaching carried past retirement into a lucrative educational consultant business that carried him to all parts of New York State. He played saxophone in the marching band, was a high school basketball coach, and an avid sailor.  He relished his time at Wog Island, a family camp in the 1000 Islands region of New York State. He would spend the days tinkering in the tool shop always making sure to save time for the coveted "Wog Island Nap". The evening would include enjoying a cocktail on the deck, a good meal and cherished time with family and friends. He was fortunate to spend summers there from the late 1950's right up until his last visit in 2019. Later in life Ralph enjoyed traveling the United States in his Motor Coach, for a period of time living the lyrics to the old Roger Miller hit "King of the Road"; one of his favorites.   He is predeceased by his parents, Harold and Eleanor, his brother and sister-in-law Howard and Barbara Vahue, and brother-in-law Douglas Coville. He is survived by his four children, daughter Kathy (Ed) Coleman of Scarsdale, NY and their children Julia and Emma, son, Jeff (Christine) of Wrentham, MA and their children, Serena, Peter and Anthony, son, David (Marie) of Albany, NY and son, Chad of West Seneca, NY. He is also survived by his sister, Elizabeth Coville of Wilmington, NC, nephew Todd (Mimi) Vahue, nephew Scott (Darlene) Vahue, nephew Brett, niece, Holly, niece Krinn (Artie) Burns, niece Kara (Jay) Boyd and grandnieces and grandnephews, Samantha, Caroline, Marissa, Eleanor, Chloe, Annelise, Elizabeth, Artie, Connor, Makenna, Haley and Owen. He will be truly missed by his companion, MaryLou Martyn, who happily shared the last several years of his life with him and, selflessly, took loving care of him during his final days. A man of few words, he let his actions and his faith guide him through life.  In the end, he was a father, a son, a brother, an uncle, a teacher, a sailor, a friend, and countless other things, all the things that a long life affords one. A memorial service will be held at 11 AM on Friday, May 21, 2021 at the Moss Feaster Funeral Home, 1320 Main Street, Dunedin, FL. Those who wish to remember Ralph in a special way may make gifts in his memory to the Tunnel to Towers organization.

Ralph Harold Vahue, 87, died on May 15, 2021 in the care of hospice in Palm Harbor, FL. He was born June 26, 1933 in New Castle PA to Harold and Eleanor (Brudin) Vahue, He grew up in Sherburne NY and graduated from Sherburne-Earlville HS in... View Obituary & Service Information

The family of Ralph H. Vahue created this Life Tributes page to make it easy to share your memories.

Send flowers to the Vahue family.