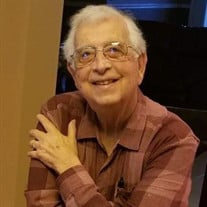 Randall C. Aungst, 91 of Clearwater Florida, passed away peacefully in his home, surrounded by family, September 21st, 2021. Randy was born September 21st, 1930, in Annville Pennsylvania, to the former Kathryn and Gilbert Aungst. He graduated from Annville-Cleona area High School, where he was a 3-sport athlete, then attended Millersville University for 2 years prior to joining the AirForce. While stationed in Iceland in the AirForce during the early 50’s he frequently traveled to Glasgow, Scotland on leave where he met Mae Anderson. They were married in 1953 and moved to Pennsylvania. After a 5-year stint in the Air Force, he graduated from Millersville with a degree in education and moved to Wilmington, Delaware where he became a teacher. In 1962 he received a Master of Education degree from the University of Delaware. In 1964, he earned a Fulbright Scholarship to teach for a year in England where his family enjoyed a one-year adventure attending school and experiencing a different culture. He later became a principal and school administrator, prior to venturing into the travel business when he opened Hockessin Travel in Delaware. His love for travel found him leading numerous high school band groups on trips to England and Europe, where they enjoyed playing at different music festivals and learning about the local history. He also led numerous Delaware National Guard groups on relaxing vacations to Hawaii. He loved to cook and became quite an adventurous home-schooled chef who enjoyed making a variety of creative dishes for family and friends to enjoy! Affectionately known as "Pop-Pop" he is survived by his loving wife of 68 years Mae, brother Larry, 3 children Brian Sr, Linda, and Sandra, 12 grandchildren Brian Jr, Rachel, Jaclyn, Diana, Phillip, Christopher, Ryan, Sean, Michael, Andrew, Samantha, Kelley, and 9 great grandchildren. Randy was preceded in death by his son Scott. The public is invited to a visitation and celebration of life which will take place at 2pm on Tuesday October 5th, at Moss Feaster Funeral Home, 693 South Belcher Road, Clearwater. In lieu of flowers donations may be made to Suncoast Hospice Foundation or Clearwater For Youth. Service will be live streamed starting at 2:30PM: http://webcast.funeralvue.com/ Event ID:61125 No Password Required

The family of Randall C Aungst created this Life Tributes page to make it easy to share your memories.

Send flowers to the Aungst family.