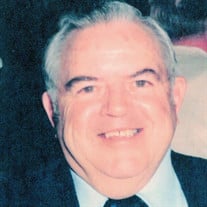 Robert Allen Turner, devoted husband, father and grandfather, 96, of Dunedin, Florida, formerly Brookfield, Massachusetts, died peacefully on Saturday March 13 with his two daughters, Barbara Turner-Delisle (spouse Lawrence O’Connor) and Cheryl Turner in attendance. He was predeceased by his loving wife of 68 years Barbara A (Delisle) Turner, his siblings, Dorothy Chandler, Evelyn Gregory and Carl Turner, and his parents George A. and Mary (Doherty) Turner. He also leaves four grandchildren Jessica Visceto (spouse Danial II), Todd Shumate, Ryan Shumate, Joshua Senecal; and eight great grandchildren Daniel Visceto III, Ricky Lazo, Lyla Senecal, Leah Senecal, Brayden Oldiges, Zacharie Kalt, Madysin Oldiges, and Eliana Kalt. Robert (Bob) worked for over 50 years as a machinist at Gavitt Wire and Cable Co. in Brookfield, MA. He became a union steward and foreman during his later years there. He served as Treasurer of the Town of Brookfield, for many years, as well as a volunteer on the Brookfield Fire Department. He was a talented member of the fire department muster team using his great speed to bring them trophies in the Hose Races. Bob was an avid athlete from his early school years, playing on the basketball and football teams, and throughout his life playing Softball, Racquetball, golfing, bowling, shuffleboard (after moving to FL, in his final season at age 94 he came in first on his team for Glen Ellen Mobil Home Park!) And he loved to square dance with his wife and their friends the Plimptons. He was a card shark playing poker, pitch and cribbage and enjoyed playing board games both in Brookfield and Florida. He also enjoyed collecting stamps and coins, traveling throughout the US with his wife Barbara, hunting (both gun and bow). He loved nature and enjoyed camping with his daughters, wife, relatives and friends in New England, especially North Truro, MA on Cape Cod. The family would like to thank all the staff of SunCoast Hospice of Pinellas County, Pearl Team, especially Courtney, Grace and Vicki for their compassionate care and support. In lieu of flowers the family requests donations be sent to SunCoast Hospice of Pinellas County, 5771 Roosevelt Blvd, Clearwater, FL 33760

The family of Robert "Bob" Allen Turner created this Life Tributes page to make it easy to share your memories.

Send flowers to the Turner family.