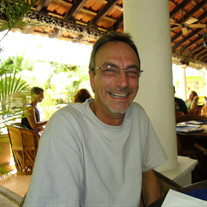 Robert Jay Csontos (Rob) passed away at Mease Countryside Hospital in Safety Harbor, Florida on Monday February 15, 2021. Rob was born September 13, 1956, in Cleveland Ohio, the son of Steve and Rose Csontos. Rob and his sibling’s life roots grew in Cuyahoga County, Ohio, where he graduated from Parma High School, Class of 1974. He furthered his education at Control Data Institute where he earned his certification in Computer Technology and Data Communications Theory and Lab, graduating with a 3.8 GPA. In 1982 Rob decided to relocate to Pinellas County Florida, where he started his family with Lori Csontos and landed a position with Ascom Timeplex Inc. He received multiple achievement awards such as, System Engineer (multiple quarters), System Engineer of the Year (1996) and Ascom Timeplex Excellence Award, just to name a few. Rob raised his family in Palm Harbor, FL and was actively involved with his community of Lansbrook by volunteering as a board member. With his comprehensive knowledge and experience, Rob later took a position as a Network Design Engineer and worked alongside his twin brother Richard Csontos and ran a successful business. Rob was indeed the backbone of his family and a great friend to all who knew him. He enjoyed spending time on his boat handing out his boat sandwiches surrounded by friends and loved ones, was an amazing cook, could fix just about anything you put in front of him, loved his dog Bailey, music and was the person the family went to for advice and approval, but above all else was a selfless, loving father, grandfather, brother and uncle. Rob loved to go fast but would be the first to slow down and help someone in need. The unbreakable bond with his family and friends created many holiday and weekend gatherings that are cherished memories today. In addition to his parents, he was predeceased by his older brother James R. Csontos (Jim). Survived by his daughters Jennifer N. Csontos and her husband Patrick Rising, of Spring Hill, FL, Heather C. Marler and her husband Kristian Marler (KC), of Plant City, FL; his son Connor R. Csontos, of Palm Harbor, FL; Twin brother Richard Csontos and his wife Cheryl Csontos of Strongsville, Ohio; Grandchildren, Slade Rising, Layla Marler, Tysen Marler, Dallas Squires, Blake Rising, Ryder Marler and Kinsley Marler; nieces, Brandy Martone, Jennifer Friedman, Kate Csontos and Corinne Lynch. A service of remembrance will be held on Saturday, March 13th at the East Lake Varsity Club, located at 36355 Lake Rd, Palm Harbor, FL, 34685. All are welcome to attend. Online condolences may be left at

The family of Robert Jay Csontos created this Life Tributes page to make it easy to share your memories.

Send flowers to the Csontos family.