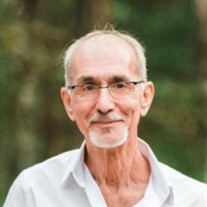 Rubens Quintas De Sousa Barbosa, 70, of Palm Harbor, Florida passed away at home on May 15th after a long and courageous battle with cancer; surrounded by family and friends, just as he always was. He was the son of the late Augusto and Alcina (Quintas) Barbosa. Rubens was born on January 29, 1951 in Via Real, Portugal. He moved to the United States with his parents in May of 1965 at the age of 14. He and his family settled in Naugatuck, Connecticut, where he resided until he moved to Florida in 2001. While in Connecticut Rubens held many jobs; most notably, owning and operating BSA Cable Contractors with his two best friends, Tony Araujo and the late Greg Soule. Together they worked hard to play harder, and never passed up an opportunity play hooky and have fun instead. In his spare time, you could find him shagging fly balls on a softball field, bowling in various leagues, driving fast cars, or fixing anything and everything he could find that was broken. Rubens was the “go to guy” to solve any problems anyone had. In 2001, he moved to Florida and began work as a Project Manager for Volt Telecommunications Group. He continued to bowl in his spare time, and very much enjoyed a round of golf with his brothers and friends. Rubens’ was best known for being a family man; family was rooted at his core. His love and pride for his family grew each day, and you could see a light in his eye as he talked about them; their happiness and enjoyment in life gave him a sense of fulfillment like nothing else could. He was a kind and loving partner of 44 years to Sandra Capristo, who loved him dearly. He was an amazing father to their daughter Christine (Colin) Bolton, and two wonderful sons Michael Barbosa and Gary Capristo Jr.. Aside from being survived by his partner, daughter, and sons, Rubens leaves behind three brothers and two sisters: Jose Barbosa (Portugal), Alcino Barbosa and his wife Karla, Leonardo Barbosa and his wife Delfina, Celia Silvia and her husband Norberto (all of Holiday, FL), and Maria Batista and her husband Carlos (Naugatuck, CT). He is also survived by his grandchildren: John and Matthew Capristo and their mother Suzanne Marques (Cape Coral, FL), Vincent, Carlo, and Sophia Barbosa (Massachusetts), and Brianna Uhl and Abigail Bolton (Palm Harbor, FL). He will also be missed dearly by nieces, nephews, and many more family and friends. Besides his parents, he was predeceased by a son, Rubens Barbosa Jr., and his sister-in-law, Gina Barbosa, wife of Jose Barbosa. Those who knew Rubens know that he would help anyone in need. Whether someone needed a ride, a tool to borrow, or an ear to bend he always gave selflessly. His kindness and generosity were unlimited and extended to all of those who asked for it. His family recalls stories of the neighborhood kids knocking on the door asking him to pump up their soccer balls and bike tires; then, as they grew, he would be asked to help with their cars or for advice on life. In honor of that memory his family asks that, in lieu of flowers, donations be made in his name to Sleep in Heavenly Peace, Pinellas, an organization that provides beds to foster children in need, or donating luggage for local foster children at a Raising Hope, Pinellas, drop off location. Sleep in Heavenly Peace, Pinellas, (https://www.shpbeds.org/chapter/fl-pinellas-co) / Raising Hope, Pinellas (https://eckerd.org/family-children-services/raising-hope/locations-donation-drop-off/). Please send any other notes or gifts of condolence to Moss Feaster Funeral Home at 1320 Main Street Dunedin, Florida. A viewing will be held at 9 AM on May 28th at Moss Feaster Funeral home, immediately followed by funeral services at St. Ignatius of Antioch at 11 AM, 715 E Orange St, Tarpon Springs, FL 34689. The family would like to thank Dr. David Wenk, Amanda, Patti and the rest of the team at Florida Cancer Specialists (New Port Richie) for not only providing Rubens with the most excellent care, love, and compassion, but for bringing him into your lives and your heart, as he did you.

Rubens Quintas De Sousa Barbosa, 70, of Palm Harbor, Florida passed away at home on May 15th after a long and courageous battle with cancer; surrounded by family and friends, just as he always was. He was the son of the late Augusto and Alcina... View Obituary & Service Information

The family of Rubens Quintas De Sousa Barbosa created this Life Tributes page to make it easy to share your memories.

Send flowers to the Barbosa family.