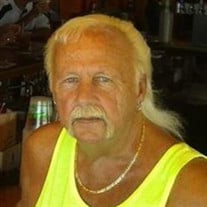 Scott Kendzora, 73, of Dunedin, Florida, formerly of Saugatuck and St. Joseph, passed away after a long battle with cancer on March 16, 2021. He was born in Chicago on July 30, 1947 and moved to Stevensvillle in 1952. He grew up there and went to Stewart Elementary and Lakeshore High School graduating in 1965. He also attended art school in Battle Creek, Michigan. With his art background he chose to be in advertising and marketing and worked at Gast Manufacturing, The Netedu Advertising Agency and Creative Advertising. He eventually left the corporate world to start his own agency, Harbor City Ad Group, with his wife, in Saugatuck. After being in Saugatuck for 19 years he and his wife, JoLynn, enjoyed traveling around Florida and moved to Key West, Mount Dora, Sarasota and settled in Dunedin. Scott loved his kids and grands, the beach, especially Glenlord beach when he was growing up, Oval Beach in Saugatuck and Honeymoon Island in Dunedin. He bought and sold cars starting before he could legally drive, keeping a list of all cars owned, and recently bought car #150. He was very happy to have reached that mile marker just a couple weeks ago. He made friends wherever he went and just enjoyed talking to people over a cocktail. He is survived by his wife, JoLynn Smith Kendzora, whom he loved with all his heart, his sister Lynn Hardke (St. Joseph), son Michael Hennrick (New Era), Kim (Mike) Sarola (St. Joseph) and Lisa (Scott) Walters (St. Joseph), six grandchildren--Lyndon, Tristen, Drew, Alicia, Seth and Hailey, and seven great grandchildren--Korbin, Nixon, Nora, Max, Charlie, Kaden, and Isabell, his uncle Warren "Bud" Kubistal (Ardie) and several cousins and nieces. He was preceded in death by his father Franklin "Scotty" Kendzora, mother LaRone Kubistal Jones, and step-father Rolland "Jonesy" Jones. Services will be in Saugatuck, announced soon.

Scott Kendzora, 73, of Dunedin, Florida, formerly of Saugatuck and St. Joseph, passed away after a long battle with cancer on March 16, 2021. He was born in Chicago on July 30, 1947 and moved to Stevensvillle in 1952. He grew up there and went... View Obituary & Service Information

The family of Scott A. Kendzora created this Life Tributes page to make it easy to share your memories.

Send flowers to the Kendzora family.