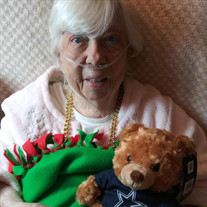 Thelma Colleen Mullins was born on April 16th 1926, at home in Alva Kentucky. Due to a coal mining accident in 1930 that took the life of her Father, she and her three siblings, two brothers and one sister, were placed in an orphanage in Kentucky.... View Obituary & Service Information

The family of Thelma C. Mullins created this Life Tributes page to make it easy to share your memories.

Send flowers to the Mullins family.