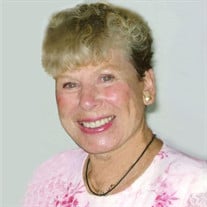 Virginia Scherr, known as Ginny, Gigi, 92, of Oldsmar, FL passed on January 11, 2022.Born August 1, 1929Ginny grew up in West Orange, NJ;and later raised her five children along with husband Al in a close-knit community called Glacier Hills in the townof Parsippany, NJ, where everyone knew each other,and gathered at the heart of the community, The Glacier Hills Pool, right behind the Scherr's backyard. The family spent many summer days at the pool, and down the Jersey Shore, and at Ginny's parents' (Henry and Ethel) lakefront house on Cranberry Lake, NJ; along with her brother (predeceased) Jack and his wife Betsey, and family. Ginny, a talented artist, who spent years in graphic design and advertising after graduating from the Newark School Of Fine and Industrial Art. After raising five children, Ginny enjoyed multiple occupations outside the home, including saleswoman, hostess, and jeweler. Ginny then headed for the warm sunshine of Florida, and spent many wonderful years playing tennis, swimming, gardening, playing cards, painting, pottery, and creating sculptures. After husband Al passed, she met partner (predeceased) Chuck, and they enjoyed time traveling, and playing tennis. Ginny, Gigi ... the most friendly, lovable, humorous, and generous person one could ever meet, always greeted new neighbors with homemade cookies or brownies. She is survived by her loving children; daughter Cindy and her husband Jerry; daughter Cathy and her husband Gerry; son Buddy and his wife Lisa; and sons Brad; and Barry and his partner Penny; and cherished grandchildren Jodi, Erika, Dan, Kate, Sophie, Brielle, Shannon and Courtney; and six great grandchildren. Ginny's later years were spent together with, and under the loving care of her son Brad, "My Best Friend, My Everything." "I'm Okay if You're Okay." A celebration of her(Virginia, Ginny, Gigi) life will be held at a later date. In lieu of flowers, planting a tree, or perennial plant would be a loving living tribute to honor her.

The family of Virginia J Scherr created this Life Tributes page to make it easy to share your memories.

Send flowers to the Scherr family.