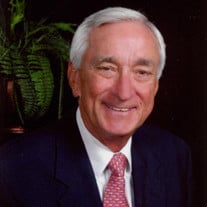 Bill Crown, longtime Clearwater resident, died peacefully at home on January 12th knowing the love of his family surrounded him. In December Bill was surprised to learn his stomach pain was due to stage 4 pancreatic cancer. From the minute he got his diagnosis he said he wanted his death to be a testament of his faith, “I understand this is terminal, there is no need to fight. I am at peace with the Lord and want to spend the rest of my days as joyfully as possible.” He made the most of his last days with friends and family, even celebrating his 80th birthday on January 4th. Bill was the oldest of three brothers who were his best friends in life. Bill, Ron and Bob, the sons of William E. Crown Jr and Nancy Hazel Flowers, were considered the local experts when it came to fishing and were often seen heading out before and after school to fish for tarpon, snook or whatever was biting that day. Bill also enjoyed waterskiing, especially impressing friends with his barefoot skiing abilities. Following Clearwater High School he went to the University of Florida where he enjoyed his time in Sigma Nu fraternity, eventually leading his chapter as president, all while earning a degree in Advanced Accounting. Bill eventually joined his father Bill Jr at the company he founded in 1946 known as Crown & Company. Later Bill’s younger brother Bob also joined the firm, and now Bill’s daughter Lindsey is the third generation to carry on the business. The list is long of the numerous ways Bill has dedicated his time to better his community and to further preservation efforts in Florida. In 1985 Bill was awarded the prestigious David Bilgore Memorial Award for outstanding humanitarian service for his leadership with Suncoast Active Volunteers for Ecology (SAVE), Morton F. Plant Hospital, YWCA, Pinellas County Education Development Foundation, Kiwanis Club, Florida Gulf Coast Arts Center and the Greater Clearwater Chamber of Commerce, among other things. He also served on the boards of St Paul’s School, Berkeley Preparatory School and Clearwater High School along with chairing Raise Excellence at Clearwater High (REACH) in the 1980s, a fundraising group to raise much needed money for things like computers and laboratory equipment at the school. Bill’s experience and efforts in conservation led to him becoming the president of the Clearwater Marine Science Center, which is now the Clearwater Marine Aquarium. But he had an even bigger dream to create an aquarium that showed the progression of Florida’s water from its underground source to the open sea and to educate and advocate for the protection of Florida’s natural environment. This dream inspired him to gather the financial backing and find a welcoming city for The Florida Aquarium which he proudly founded in 1995. More recently Bill and his wife Bette were honored with the rest of the Crown family by the Salvation Army as recipients of the Dr. William Hale Commitment to Community Award, and Bill and Bette were made honorary chairs of the Community Dental Clinic. Bill believed in working hard and playing hard and for fun he continued fishing with a passion, enjoyed membership in Privateers, served as President of Casada, and was Commodore at Carlouel Yacht Club. He has recently discovered a love of golf and has enjoyed playing in his backyard at the Belleair Country Club. But what brought him true joy was running Cousins Camp with Bette for their 15 grandchildren who called him Big Daddy. Family and faith were most important to Bill. More than 30 years ago he attended a Cursillo church retreat at the urging of Bette and to his surprise, and hers, his life was enriched and forever changed. From that weekend he dedicated his time, energies, prayers and treasure to sharing the Good News in many different ways including Prison Fellowship, Isaiah’s Inn, Bible Study, and fellowship and service at the Church of the Ascension. Bill is survived by his wife of 48 years, Bette; his sons Will (Jennifer) and Brian (Shannon) Crown; daughters Dawn Morrison (Dugald); Shannon Parker (Brad); Ali Martin (Stacy) and Lindsey Hardee (Bill), along with his much-loved grandchildren Will and Josh Crown; Meggie, Katie, Josie and Ellie Morrison; Lucien, Jude and Anders Parker; Lilly and Anna Martin; Samantha and Chris Crown; and Mari and Baker Hardee. He is also survived by his sisters-in-law Karen and DeLene Crown and their families. The service will be held at the Episcopal Church of the Ascension (701 Orange Avenue) on Friday, Jan 21 at 4pm. In lieu of flowers please consider a donation in his name to the Church of the Ascension, Florida Wildlife Corridor, the Community Dental Clinic or the Salvation Army.

Bill Crown, longtime Clearwater resident, died peacefully at home on January 12th knowing the love of his family surrounded him. In December Bill was surprised to learn his stomach pain was due to stage 4 pancreatic cancer. From the minute... View Obituary & Service Information

The family of William E Crown III created this Life Tributes page to make it easy to share your memories.