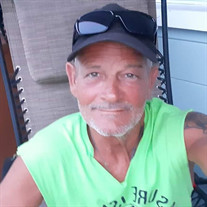 William Frank Ellison, 59, passed away on April 16, 2021, at Northside Hospital in Clearwater, Florida. Born in West Memphis in 1962, Frank graduated from Frayser High School in 1980. Frank was a talented athlete. He was coached by his father, Randy, from t-ball to baseball and softball. He also excelled as a high school quarterback and later in life grew to love the game of golf to become a scratch golfer. Charming and outgoing, Frank had a varied work life and discovered that he liked working with his hands to go on to work in construction. He often said, “for a guy who could not nail two boards together,” that he got “pretty good at it.” He loathed cold weather, loved the beach, and re-located to Florida for the last six years of his life. Frank is predeceased by his birth father, William (Billy) Ellison; and his grandparents, Frank & Nell Pitts and Oliver & Susie Ellison. He is survived by his son, Blake Ellison of FL; his parents, Randy & Paula Krone of TN; his siblings, Oliver Ellison II (Claudia) of TN, Belinda Cummins (Robert) of MS, Tracy Walker (Scott) of MO, Preston Krone (Karrie) of TN, and Anthony Krone (Jaime) of TN. He is also survived by aunts, uncles, cousins, nephews, nieces, and a host of friends who loved him. In death, Frank was able to give the gift of life through the donation of his kidneys. Through his generosity, the lives of two individuals and their families will be forever impacted by his gift of life. It is hoped that others will be encouraged to consider organ donation as an option in end-of-life decisions

William Frank Ellison, 59, passed away on April 16, 2021, at Northside Hospital in Clearwater, Florida. Born in West Memphis in 1962, Frank graduated from Frayser High School in 1980. Frank was a talented athlete. He was coached by his father,... View Obituary & Service Information

The family of William F. Ellison created this Life Tributes page to make it easy to share your memories.

Send flowers to the Ellison family.