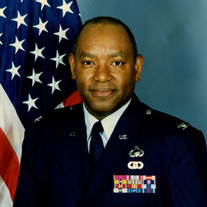 HORNE, William B., II (ret. Colonel, USAF), passed away on Saturday, August 14, 2021. He was born in Wichita, Kansas on June 23, 1949, but was raised in Tulsa Oklahoma. After graduating from Booker T. Washington High School he entered the Air Force ROTC program at Tulsa University where he received a B.S. in Chemistry. While in service to his country, Col. Horne obtained a M.S. degree in Human Resource Management from Pepperdine University and a second M.S. degree in Political Science from Auburn University. During his career with the Air Force, he graduated from Squadron Officer School, Air Command and Staff College, and Air War College. Col Horne began his military career as a weapons controller in the 4765th Drone Squadron. During his career, he served in many positions. His last two assignments were at Yokota Air Base in Japan as the Support Group Commander with his last position as Chief, Directorate of Manpower, Personnel and Administration at United States Central Command at MacDill Air Force Base. His area of operations covered the map from eastern Africa, across the Middle East to India. Col Horne’s military decorations include the Legion of Merit, Defense Meritorious Service Medal, Meritorious Service Medal with four oak leaf clusters and the Air Force Commendation Medal with one oak leaf cluster. Retirement from the Air Force was immediately followed by a career as the city manager of Clearwater, Florida where he served for 22 years. He loved his second career as city manager and often told people he was having fun, although he was quite serious about making Clearwater the best City possible. His family will miss being a part of his amazing adventures of a life well lived. He is survived by a wife, the former Loretta Davis of Kansas City, Missouri, son, LaMoyne Horne, daughter, Christina Marie Horne, sister, Anita Scott (Jerry) and a host of uncles, aunts, cousins, nieces and nephews. A memorial service is planned on Saturday, August 21, 2021, at 11 am at Calvary Church, 110 McMullen-Booth Rd. 33759 . The service will, also, be live streamed. Due to Covid restrictions and at-risk family members, a mask will be required if attending service in person. Burial will be at Arlington National Cemetery in Arlington, Virginia, at a later date.

HORNE, William B., II (ret. Colonel, USAF), passed away on Saturday, August 14, 2021. He was born in Wichita, Kansas on June 23, 1949, but was raised in Tulsa Oklahoma. After graduating from Booker T. Washington High School he entered the Air... View Obituary & Service Information

The family of William B. Horne II created this Life Tributes page to make it easy to share your memories.

Send flowers to the Horne family.